South Africa’s Naspers internet group has moved a $7.6bn chunk of its stake in Tencent to Hong Kong’s clearing and settlement system in order to smooth future sales of the shares to fund a stock buyback.

Naspers, Tencent’s biggest shareholder, said in a statement that it had moved the block of 192mn shares “to enable . . . market trading of such shares, in an orderly way . . . over time”, and that it had sold 1mn of the shares on Thursday, reducing its stake to below 28 per cent.

The move comes two months after Prosus, the company’s Amsterdam-listed international investment arm, abandoned its pledge not to sell stock in one of China’s most valuable companies, in order to fund an open-ended buyback to support its own struggling share price.

Global investors are cutting their holdings in Chinese technology stocks following a government crackdown and regulatory onslaught that has bruised the sector. The S&P China Tech 50 index, which tracks the 50 largest Chinese companies in the sector, is down 36 per cent over the past 12 months.

SoftBank sold the bulk of its stake in Alibaba in August, while Warren Buffett’s Berkshire Hathaway has lowered its holdings in Chinese electric carmaker BYD.

Naspers’ warning that it would sell its Tencent stake has weighed on the group, with the company’s shares declining more than 20 per cent since a June peak. Tencent’s shares closed down more than 3 per cent on Thursday.

When Naspers announced the open-ended buyback in June it said it would manage the sales of Tencent shares to be gradual and to represent “a small percentage of average daily traded volume of Tencent shares”. 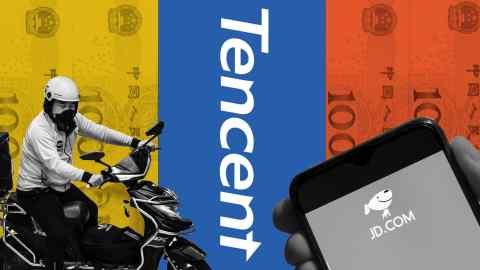 The 192mn shares were placed in Hong Kong’s Central Clearing and Automated Settlement System on Wednesday. Shares are usually put in the clearing system before being sold.

Naspers is attempting to narrow a gap between the valuations of its listed vehicles and that of its Tencent stake through the repurchases, which it has said could run for years if necessary.

The Chinese tech giant reported its first decline in quarterly revenues for the period ending in June after advertising revenue shrank 18 per cent.

Beijing’s crackdown on the tech sector has come as growth in the world’s second-largest economy has been dragged down by a crisis in the property sector and rolling Covid-19 lockdowns.

Tencent itself has been selling down its stakes in tech companies such as JD.com and Singapore’s Sea. The Financial Times reported that the company had outlined a soft target of divesting about Rmb100bn ($14.4bn) this year, depending on market conditions.