A year ago, before Facebook had turned Meta, the social media company was sporting a market cap of $1 trillion, putting it in rarefied territory with a handful of U.S. technology giants.

Today the view looks much different. Meta has lost about two-thirds of its value since peaking in September 2021. The stock is trading at its lowest since January 2019 and is about to close out its third straight quarter of double-digit percentage losses. Only four stocks in the S&P 500 are having a worse year.

Behind the big Apple downgrade: Analyst who made the call reveals why the stock is in trouble

Facebook’s business was built on network effects — users brought their friends and family members, who told their colleagues, who invited their buddies. Suddenly everyone was convening in one place. Advertisers followed, and the company’s ensuing profits — and they were plentiful — provided the capital to recruit the best and brightest engineers to keep the cycle going.

But in 2022, the cycle has reversed. Users are jumping ship and advertisers are reducing their spending, leaving Meta poised to report its second straight drop in quarterly revenue. Businesses are removing Facebook’s once-ubiquitous social login button from their websites. Recruiting is an emerging challenge, especially as founder and CEO Mark Zuckerberg spends much of his time proselytizing the metaverse, which may be the company’s future but accounts for virtually none of its near-term revenue and is costing billions of dollars a year to build.

Zuckerberg said he hopes that within the next decade, the metaverse “will reach a billion people and “host hundreds of billions of dollars of digital commerce.” He told CNBC’s Jim Cramer in June that the “North Star” is to reach those sorts of figures by the end of the decade and create a “massive economy” around digital goods.

Investors aren’t enthusiastic about it, and the way they’re dumping the stock has some observers questioning if the downward pressure is actually a death spiral from which Meta can’t recover.

“I’m not sure there’s a core business that works anymore at Facebook,” said Laura Martin of Needham, the only analyst among the 45 tracked by FactSet with a sell rating on the stock.

Nobody is suggesting that Facebook is at risk of going out of business. The company still has a dominant position in mobile advertising, and has one of the most profitable business models on the planet. Even with a 36% drop in net income in the latest quarter from the prior year, Meta generated $6.7 billion in profit and ended the period with over $40 billion in cash and marketable securities.

The Wall Street problem for Facebook is that it’s no longer a growth story. Up until this year, that’s the only thing it’s known. The company’s slowest year for revenue growth was the pandemic year of 2020, when it still expanded 22%. Analysts this year are predicting a revenue drop.

The number of daily active users in the U.S. and Canada has fallen in the past two years, from 198 million in mid-2020 to 197 million in the second quarter of this year. Globally, user numbers are up about 10% over that stretch, and are expected to increase 3% a year through 2024, according to FactSet estimates.

“I don’t see it spiraling in terms of cash flows in the next few years, but I’m just worried that they’re not winning the next generation,” said Jeremy Bondy, CEO of app marketing firm Liftoff.

Sales growth is expected to hover in the single digits for the first half of 2023, before ticking back up. But even that bet carries risks. The next generation, as Bondy describes it, is now moving over to TikTok, where users can create and view short, viral videos rather than scrolling past political rants from distant relatives with whom they mistakenly connected on Facebook.

Meta has been trying to mimic TikTok’s success with its short video offering called Reels, which has been a major focus across Facebook and Instagram. Meta plans to increase the amount of algorithmically recommended short videos in users’ Instagram feeds from 15% to 30%, and Bondy speculates the company will likely “get tremendous revenue flow from that” algorithmic shift.

However, Facebook acknowledges it’s early days for monetizing Reels, and it’s not yet clear how well the format works for advertisers. TikTok’s business remains opaque because the company is privately held and owned by China’s ByteDance.

Sheryl Sandberg, who’s leaving the company on Friday after over 14 years as chief operating officer, said in her final earnings call in July that videos are harder than photos in terms of ads and measurement, and that Facebook has to show businesses how to use the ad tools for Reels.

“I think it’s very promising,” Sandberg said, “but we’ve got some hard work ahead of us.”

Skeptics like Martin see Facebook pushing users away from the core news feed, where it makes tons of cash, and toward Reels, where the model is unproven. Martin says Zuckerberg must know something important about where the business is headed.

“He wouldn’t be hurting its revenue at the same time he needs more money, unless he felt like the core business wasn’t strong enough to stand alone,” Martin said. “He must feel he has to try to move his viewership to Reels to compete with TikTok.”

Zuckerberg has at least one major reason for concern beyond just stalled user growth and a slowing economy: Apple.

The 2021 iOS privacy update, called App Tracking Transparency, undermined Facebook’s ability to target users with ads, costing the company an estimated $10 billion in revenue this year. Meta is counting on artificial intelligence-powered advertising to eventually make up for Apple’s changes.

That may amount to little more than a band-aid. Chris Curtis, an online marketing expert and consultant, has seen social networks rise and fall as trends change and users move along. And that problem isn’t solvable with AI.

“I’m old enough and I was there when MySpace was a thing,” said Curtis, who previously worked at Anheuser-Busch and McKinsey. “Social networks are switchable, right?”

When you look at Meta’s user numbers, Curtis said, they suggest the company is “not in a good position.”

‘Force for good or evil’

The last time Facebook’s market cap was this low, it was early 2019 and the company was dealing with the continued fallout of the Cambridge Analytica privacy scandal. Since then, Facebook has suffered further reputational damage, most notably from the documents leaked last year by whistleblower and former employee Frances Haugen.

The main takeaway from the Haugen saga, which preceded the name change to Meta, was that Facebook knew of many of the harms its products caused kids and was unwilling or unable to do anything about them. Some U.S. Senators compared the company to Big Tobacco.

Denise Lee Yohn, author of brand-building books including “What Great Brands Do” and “Fusion,” said there’s little evidence to suggest that Facebook’s rebranding to Meta late last year has changed public perception of the company.

“I think the company still suffers from a lot of criticism and skepticism about whether they are a force for good or evil,” Yohn said.

Rehabilitating a damaged brand is difficult but not impossible, Yohn said. She noted that in 2009, Domino’s Pizza was able to successfully come back from a crisis. In April of that year, a video made as a prank by two restaurant employees went viral, showing one of them doing disgusting acts with food while cooking in one of the company’s kitchens. Both employees were arrested and charged with food contamination.

In December 2009, Domino’s launched a marketing blitz called the “Pizza Turnaround.” The stock climbed 63% in the first quarter of 2010.

Yohn said the company’s approach was, “We’ve been told our pizzas suck, and so we’re actually going to make substantive changes to what we are offering and change people’s perceptions.” While it sounded initially like “just marketing speak,” Yohn said, “they actually really did change.”

Zuckerberg, on the other hand, is not “coming across as a leader who is serious about changing his culture and about changing himself and about kind of creating a company that will be able to step into the future that he’s envisioning,” she said.

Meta’s reputational hit could also harm the company’s ability to recruit top-tier talent, a stark contrast to a decade ago, when there was no more prized landing spot for a hotshot engineer.

A former Facebook ad executive, who spoke on condition that his name not be used, told CNBC that even though TikTok is owned by a Chinese parent, it now has an edge over Meta when it comes to recruiting because it’s viewed as having less “moral downside.”

Ben Zhao, a computer science professor at University of Chicago, said he’s seeing that play out on the ground as an increasing number of students in his department are showing interest in working for TikTok and ByteDance.

In order to stay competitive, given how the market has punished tech stocks this year, Zhao said Meta and Google are “having to pay more and are having certainly to handout more lucrative stock options and packages.”

Still, Zuckerberg has a history of proving his doubters wrong, said Jake Dollarhide, the CEO of Longbow Asset Management in Tulsa, Oklahoma.

Dollarhide remembers when investors ran from Facebook not long after its 2012 IPO, scoffing at the company’s ability to move “from the PC to the mobile world.” Facebook’s mobile business quickly caught fire and by late 2013, the stock was off to the races.

Zuckerberg’s success in pivoting to mobile gives Dollarhide confidence that Meta can cash in on its bet-the-farm move to the metaverse. In the second quarter, Meta’s Reality Labs division, which houses its virtual reality headsets and related technologies, generated $452 million in revenue (about 1.5% of total Meta sales) and lost $2.8 billion.

Dollarhide’s firm hasn’t owned Facebook shares, though, since 2014, preferring the trajectory of tech companies like Apple and Amazon, two of his top holdings.

“The reality is they can be perceived as a value company and not a growth company,” Dollarhide said, regarding Meta.

No matter what happens in the next year or two or even three, Zuckerberg has made clear that the future of the company is in the metaverse, where he’s banking on new businesses forming around virtual reality.

“The real question is — are daily users ready for the metaverse yet?” Zhao said. “Is the underlying technology ready and mature enough to make that transition seamless? That’s a real question and that may not be all up to Facebook or Meta at this point.”

If Zuckerberg is right, perhaps 10 years from now Meta’s stock price from the depths of 2022 will look like the discount of the decade. And if that happens, predictions of a death spiral will be mocked like a 2012 cover story from Barron’s, headlined “Facebook is worth $15” with a thumb pointing down. Four years later, it was trading near $130.

'We shun most stocks' amid unrealized recession risk

Sat Oct 1 , 2022
The world’s largest investment manager is avoiding the stock market and warning investors to do the same. Strategists at BlackRock’s (BLK) Investment Institute said in a note published Monday that the firm was shunning “most stocks” as monetary policymakers underestimate the severity of a potential recession that could ensue from […] 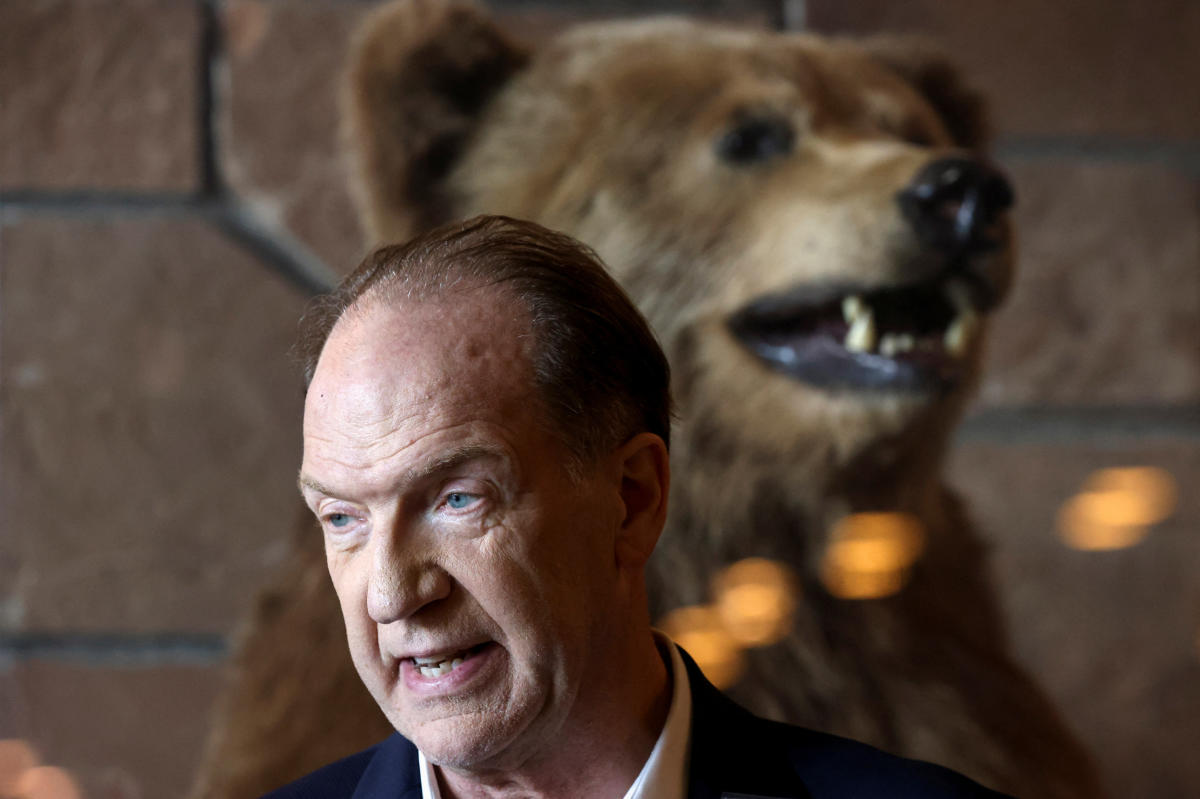